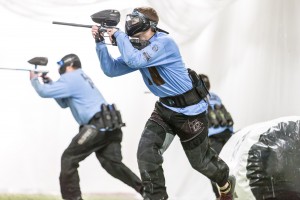 There is more to playing paintball games then just aiming and shooting the other team. Many players choose to play specific games in order to change things up and add some excitement to the game.
Here are our top 3 picks for paintball games to play with a group:

The goal of this paintball game is to simply eliminate all the players from the other team(s). This is the most basic paintball game as well as the most commonly played. Groups split into multiple groups (at least 2) and will try to hit the other team’s players. The game is over when there is one person left standing.

With capture the flag you want to split your group up into 2 teams. Once teams have been established a “flag” needs to be set up at each of the team’s bases. Flags do not necessarily have to be an actual flag, just an object that is easy to grab and run with. The object of the game is to get to the other teams base, capture their flag, and then return to your team’s base without being eliminated.

These can be a wide variety of different paintball games all built around a specific scenario. An example could be playing as the secret service tasked with protecting the “president”. This scenario works by selecting one player to be the president, and a team of “secret service agents” who must protect the president. This scenario works best when walking down a straight path with a specific end goal. The offensive team then hides off to the sides (wooded driveways work great for this paintball game) and shoot at the president while under cover. The game is over either when the president is hit by a paintball, or when the president makes it to the finish.